i like watching Krahai Lao. i learn a lot even if sometimes there's really no lesson, i still learn something. and i think it's obvious coz i buy 80% of the featured products. but last week the topic was Buddhism.

i like how the monk answers. it's not boring answers. the answers are adapted into the modern times. and then the monk was asked about those without religion. 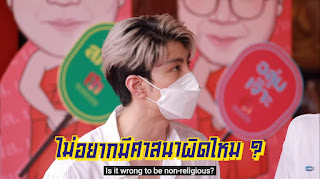 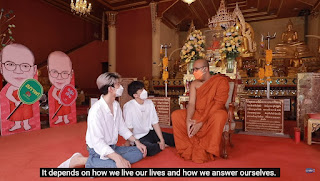 yes, it really depends on how you live your life.
then the day after, I listened to a Christian podcast.
but the pastor in the podcast said.. "(the good or evil that those who do not read the Bible know) is based on the standards of the world. this is the basic good. but the good that we're talking about, is the good based on the standard of God. and this is the Word of God. the good that does not change. it will never change."
this made me reflect. what is good, what is the truth.. so let's discern the Word and reflect and think of what would Jesus do.. pray..

I’ve always wanted a Flip phone. That’s why the ex gave me a Sony Z600 before. And what I lowkey looked for when we visited Japan.

So when I heard that Samsung will have a flip phone, I got excited. Then I saw its ad in Youtube (the one with 2 ladies showing the features of the phone), I really watched it and became convinced.
For the first time, I pre-ordered a gadget. And it has been a month since I got my phone. 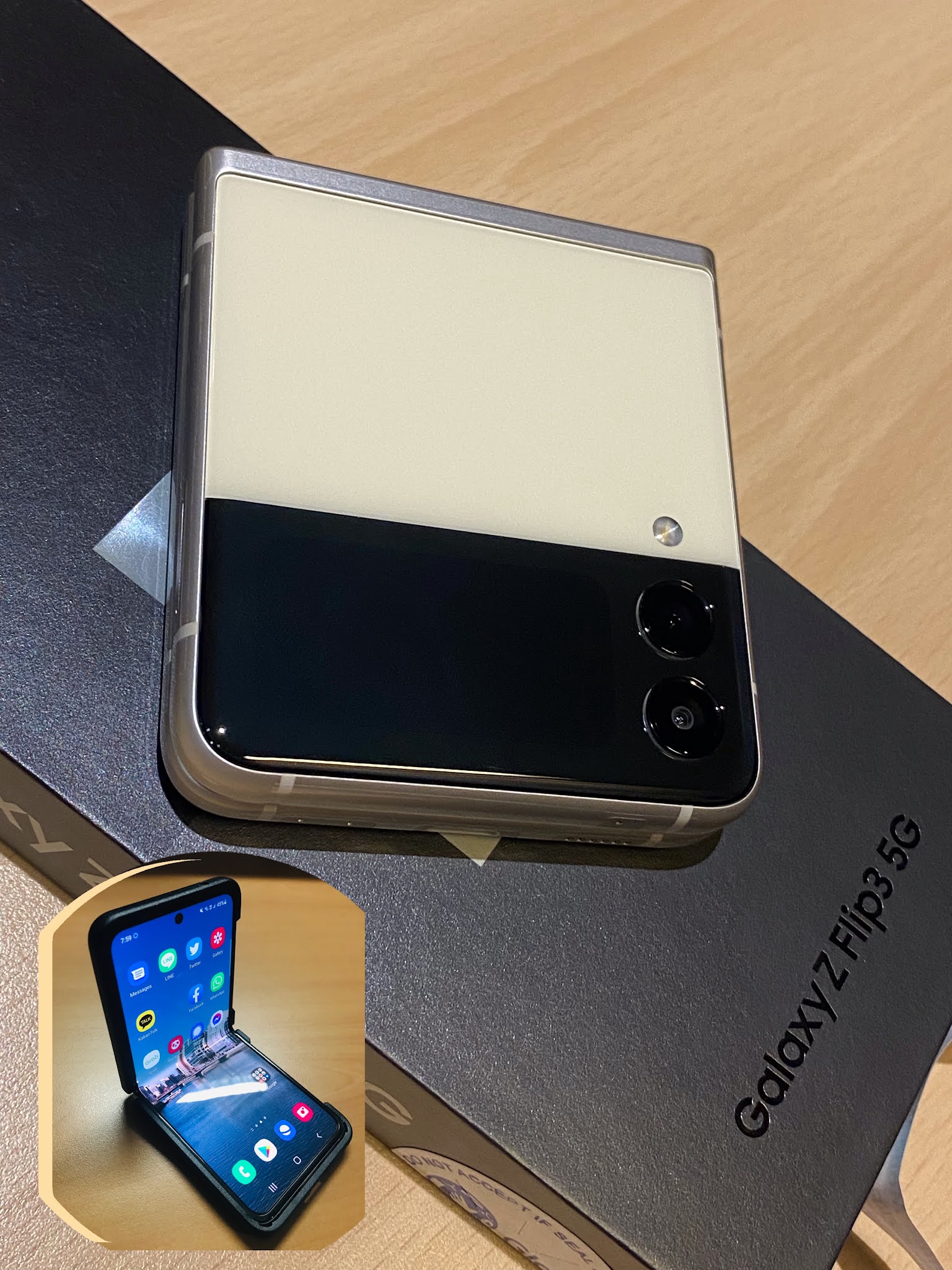 So how is the phone? I am enjoying it! Especially the cover screen. Every week, I change it to a gif of my celebrity crushes. When I feel stressed at work, I would just double tap the screen and then I would smile. 😊 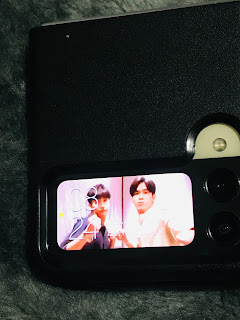 Also, I felt excited when it fit my jeans pocket. It’s a big deal for me! I’ve been using iPhone 7Plus covered with Otterbox defender so just imagine how big it is. And my flip is a tiny baby compared to that. Hehe. 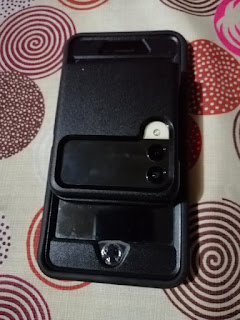 And in meetings, people do not notice that I’m checking my messages coz it’s small and i’ve covered it with a black Otterbox (yeah, I’m a fan of Otterbox.. might blog about it next time), so it doesn’t look like a phone. They would think I’m just tapping something. Hehe. But sad thing is I can’t reply to the messages.
After using only an iPhone for 8 years (and a Blackberry prior to that), I only got confused for a day but later on I’m totally comfortable already and using it with ease.
But I’m still bestfriends with Siri. Coz Okay, Google is slower in responding and is totally quiet that I don’t know if she heard/understood me. Unlike with Siri who responds with “let me listen” if I ask for a title of a song, letting me know that she understood my request.
I also love how you can have 2 apps/tabs open simultaneously.

And even if there’s the fold in the middle, you can still watch clearly your shows. It won’t be a bother. 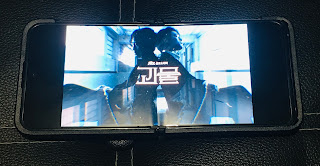 So do I love it? You bet I do.💙
By the way, this is not a paid ad. I just want to post about my phone but I can’t post it in Twitter coz I don’t know why but I don’t want friends to know I bought a new phone. Let them know when we see each other (I wonder when would that be). So I’ll just blog about it. I haven’t posted for a year anyway.
Edit: i also posted portions of this on Twitter coz blogspot is messing up the photos😞 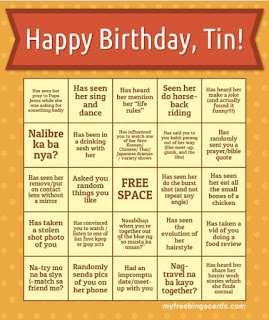 Some friends did a bingo for me for my birthday and pretty much it really describes me. Except for the horseback riding 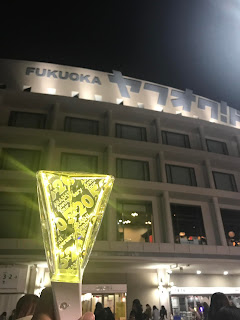 If I’ll describe my 2019, i think it’s Arashi year for me. First time to watch their concert and first time to see them up close (and not even a concert). And I think the major extracurricular activities that I had last year was because of MJPH (an unofficial Arashi fans group in the Philippines). I still feel so blessed to see them in Singapore. It was afterall a perfect timing. My only plan that weekend was to celebrate my birthday with friends then a week before, Sho was telling the world that they will be in Singapore on the date I’m there. 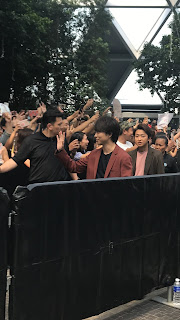 I’m thinking why I was so blessed last year with Arashi.. i was not a major fan like some that i know of. I don’t buy their merch unless bags. I didn’t even buy their album (sorry, practicality kicked in). Then I realized, God blessed me coz even if I was not that supportive of them myself... I was helping other fans in their fangirling feels through MJPH. I may not have spent for their CD, but I spent my own money and contributed time just so that activities will be a success. 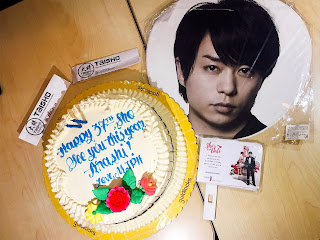 i am currently watching a Korean drama, with one episode left. it's a thriller. title is Sohn (The Guest). 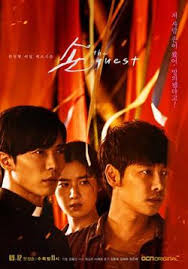 it's about a psychic, a priest and a detective working together to stop the possessed from killing and exorcise the possessed. 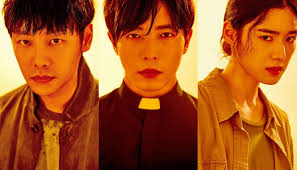 i'm not a horror fan, but i can't stop watching this. it really made me follow it every week.

but every time i watch the drama, it makes me think. how am i as a person? how is my heart? is it free of hatred and bitterness? how can i guard my heart that i won't have bitterness in my heart?

i remember this episode, he loves his family. his family is his life. but still in the end, when he was possessed, it revealed that deep in his heart he had some bitterness in his heart regarding his family.

so if ever i would encounter someone/something who would want to possess me, would i be possessed?

also, this drama made me pray more. i am the kind of person who likes to count the seconds. i mean for example, i am waiting of something, i will count the seconds. but now, instead of counting i would recite the Lord's Prayer (Our Father).

so how about you? how's your heart?

i was sick the whole trip and i think the worst is during day 2. and honestly, this is our most adventurous day. but still there are things i enjoyed even if i was feeling sickly..

if you're a fan of the Line messaging app or their games, you would love to visit this cafe. actually, even if you don't know Line and just a fan of cute stuff, you would still like this place. it's crowded with Line characters stuff. you can have a date with Brownie 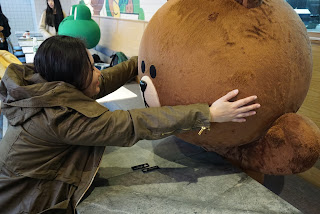 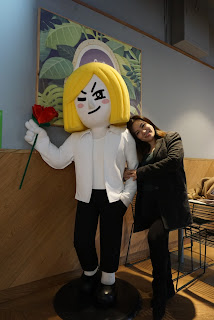 or just seat beside Cony. 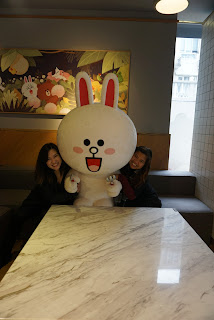 their food is also cute. i just had hot choco (thanks Joyce & Yan for the treat), but honestly i didn't like it. it's bland. but the cup is cute.  hehe. oh, and it's expensive. it's 34 RMB. 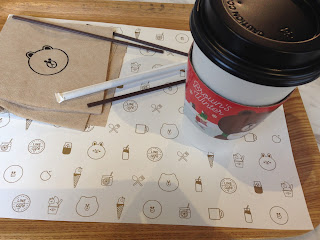 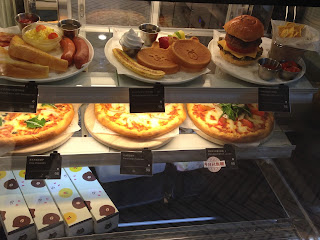 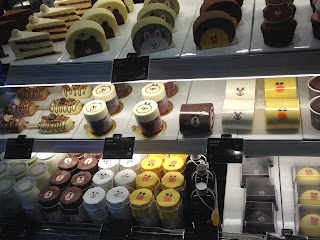 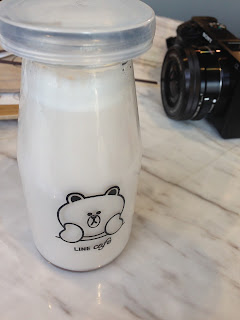 but still i suggest you to visit it. and the best thing about the cafe, picture-taking is very much welcome. 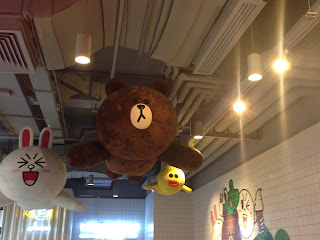 The Food at Dongjing Station

it had been a long train ride.. it's lunch time and we still don't know how to get to Zhujiajiao Water Town. good thing there are vendors selling outside the Dongjing station.

for just 5 RMB, you can have your fill of this.

and 8 RMB for the noodles, and they have friendly staff 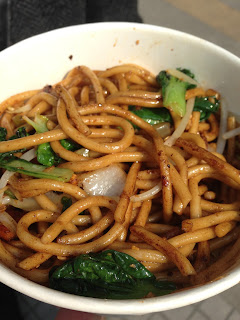 the day before, we saw a long line of people at a certain shop in Xintiandi, so we decided that we'll try it the next day. since it's really late already, there's no more line anymore. 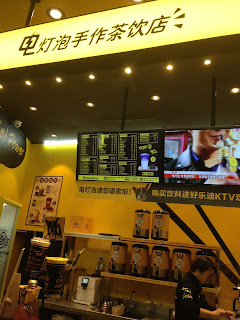 and good thing, they still have one of their bestsellers. the cup in their display photo is nice (shaped like a bulb). and we're surprised that it's really shaped like a bulb! and it's made of glass. 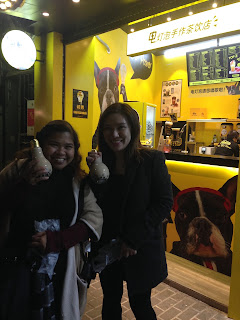 but you know the other great thing about it? it lights! 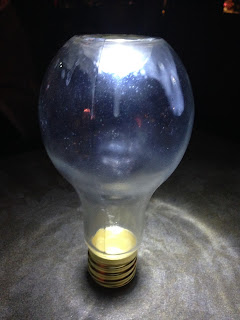 it is more expensive than the milk tea stores nearby, but i think it's worth it..

we really don't like to eat Thai food coz we're in Shainghai. it should be Chinese food and not Thai. but it was really late, Mystic South is also already closed.. and Simply Thai in Xintiandi is open until 12 midnight. so we just ate there. but you know what, i'm glad we ate there. i love their food! and the serving is for sharing. but i'm warning you.. it is spicy! if you're tired of Chinese food, i totally suggest for you to try Simply Thai.

with these places, we visited, i felt a little better from my sickness. actually, not mentioned here is our main agenda for the day. i'll try to write a separate post where that will be included

Labels: all around the place(s)