wow! it's been a year already since my last entry here. a lot has happened in my life between those intervals. i'll just talk about some of the highlights for this year. mostly serving the Lord. first is the SE37 sponsorship. i really gave my all to that sponsorship, not sleeping for 48 hours and really doing everything i can for its success. second, sharing my life story last LSS24, just last april also. 1st week and last week of april is really for the Lord. after my sharing, i was told that I can ask God for anything. since malakas daw ako sa kanya coz i shared my life plus i served nung sponsorship. i really didn't ask God for anything. but honestly, i was expecting for blessings to pour into my life. however, i felt that it's not blessings that came into my life and my family but problems. especially when my lola was taken to the hospital. that was may 2, just a week after my sharing. since then until now, she is still comatosed. we didn't expect that she will last this long. we were given just a week or two na lang by the doctors, but now it's already a month and looks like she is still continues fighting. but this placed a dilemma to us especially my mom coz she is the one paying. our bill has reached almost 200 thousand pesos already. i wanna help my mom, but i don't know how.

our office had a raffle. prizes ranged from 10,000pesos to 500,000pesos. i'm not lucky with raffles so i am not expecting to gain anything from it. bt i prayed to God that i hope whoever will win really needed the money. parang nakakatampo kung mayaman ang manalo then ako wala na sobrang nangangailangan. siguro nakulitan saken si God. He let my sister win the 3rd prize. it was really a blessing from God. 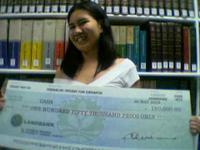 also i was touched with my officemates, particularly those coming from our department. coz they were really happy for me. they did not see it as luck but as a blessing. i know they are praying for my lola and my family, and i felt that the raffle was part of His answer to their prayers. i asked why was it my sister who won and not other family members. this was easily answered, because my sister has already plans for the money. and the good thing is she is really going to share it to others. those who really needed it. the raffle had really been a blessing to us. i really felt God's love during that time. just like what emmans said when he won a phone in a raffle, just pray and have an expectant faith.
THANK YOU LORD!!!